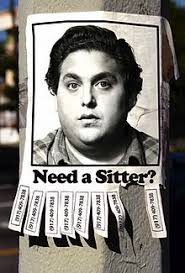 Why don’t casting directors do Jonah Hill a favor and stop casting him as the college student with no hope with the lady’s. He just isn’t believable any more as these type of characters, the guy is 28. I don’t know, maybe this is your average looking 21-year-old American!! Here some news for you Yankees he looks 33.

Maybe he is not actually portraying a student, but that’s the image that comes across, he does live with his mother and the girl from the open scene seems to be his first mis-adventure into female heart-break.

The movie really gets going when….”fooled you” it never goes anywhere. You know where its going, he shows up to babysit as the original babysitter falls ill. Of course the kids are going to be hard work or there isn’t going to any comedy to behold. Lets be honest there isn’t any anyhow.

5 hours later and after being chased by gangsters, police and drug dealers they all end up back at home safe and sound with the nice little message of, the kid are all great and the babysitter is not a fat loser.

80min is still to long, could have been a sitcom.