scoop on how movies are made and also how people were cast in certain movies. 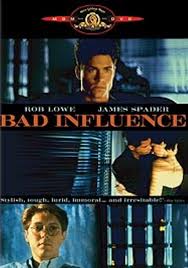 First off,Bad Influence (1990), I liked the idea of the movie,a nervous guy (spader) is going about

his every day life trying his best to succeed but hates any kind of confrontation.

The lead finds himself being picked on in a bar,in steps Rob Lowe’s character to

defend the weakling in distress. 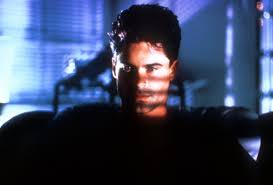 He then goes about teaching his new prodigy how to get up to all sorts of trouble,parts of these

fact even though its still early days in my Lowe marathon,I’m starting to detect that Lowe has

one speed,that speed being the the good looking,smug bad guy!

I have never seen a movie with Lowe,were this wasn’t in his character,which makes me think that

maybe he is not that great a character actor,or I just don’t like his face!

Either way I will try and keep an open mind for the next few movies I have of his,