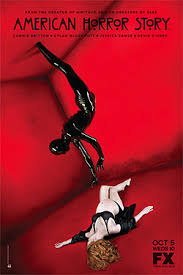 When I was a kid I feel I was spoiled with such classics as Friday 13th,Halloween and Childs play series,since then I dont have a lot of time for Horror,most of it is rehashed stories and stories told a hundred times before.

That is,until now,American Horror story has blown me away with it’s original concept and unique ability to scare myself and im sure many others.

A family move into a new house without realising that the house has a history,known as murder house to the local tour company,the family dismiss this news until some of its past decides to welcome its new guest,gone are the days ghost’s and objects flying off shelves,the makers of this series have made a strong move in introducing a new character in each episode,so for example the show starts off in1960’s in one episode and follows two nurses,then the show flips back to the present day and reveals why the previous tenents have a story which relates to them.

The whole cast are interesting and you feel something for all of them within a few esisodes.

Thank you America, for another classic series of television.