Tonight was probably the third time I have watched Heat,apart from one scene were Robert De niro and Al Pacino actually interact,the rest of the film is one wet dream for Michael Mann.(writer & director)

The whole movie feels contrived to me,rather than Mann thinking creatively and breaking new ground, several scenes are included into the film to make the trailer more appealing to the masses,the dialogue feels like it was a copy a paste job from the last ten cop movies to make a mark at the box office. 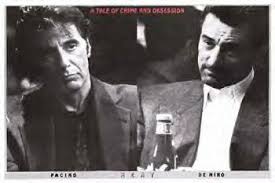 The ability of either actor is not in doubt,they are probably on par with each other and leave other actor’s in fear of their talents,as is evident in this movie as most of their co-stars look like extra’s and not part of the movie.

Some people could argue that Mann was building tension by only allowing his biggest two stars a few minutes on-screen together,I would argue that he wasted the chance to really do something special and not please the popcorn munching brigade with such a quirky Decison.

To sum up,Mann thought he had already made a classic before rolling commenced.