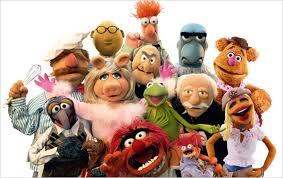 Now going back to childhood memory’s is normally fun for all about  5 minutes , then you remember you where a child, then realise how old you are getting.  I remember ever so fondly Sunday nights around 6pm when Kermit would appear and introduce the show, followed by…

Its time to play the music

Its time to light the lights

Its time to meet the muppets on the Muppet Show tonight.

The show always had a special guest, the most famous people of the time would be fighting to get on the show. If you appeared on the Muppet show then you made it in the Hollywood circle.

This movie is a pure take back to the era of the show, The Muppets have all but long been forgotten,  the studio is about to be turned into a museum. But the buyer has an alternative plan, after he has purchased the studio he plans on tearing it down. Hiding in the room while the plan is being formulated is a new member of the muppet cast, on hearing that there is a clause in the plans he goes about try to get the old team together to raise the money to save the studio.

I guess I forgot the Muppets like to sing…and sing they do. After 10 minutes I’m thinking” oh no, I can’t handle this for one and half hours”, these type of movie are why we only watched when we were kids. Anyhow I stuck with it and waited to see if the little fur balls would chill their vocal chords for five minutes and hit some dialogue. I’m glad I did, apart from the cheesy songs the movie really does have some laugh out loud moments. It was nice seeing all the muppets gang again, sort of like seeing old School friends,” but these friends you actually like”.

The movie has no shortage of stars at hand to help out, Jack Black is their special guest, not of his own choice. Jason Segal and Amy Adams are the leading humans, Zach Galifianakis appears as hobo Jo. There are a few old school actors at hand also popping up to say “look im still working, cast me please in something”.

A fun movie, the songs get a little annoying, not bad to kill a little time, if you have seen everything of late.