This is probably the oldest movie recommended to me,I have to be honest when I say I didn’t think they made any film’s of note until the 60’s,I could not have been more wrong.

Two guy’s commit a murder and decide not to dump the body, they will instead throw a party,with all of  the victims friends and family invited.

At the party,everybody is in the dark to the fact that their friend is dead, at his point,the movie begins to throw up many questions and twists. 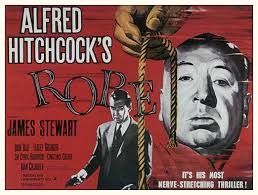 James Stewert is outstanding throughout this movie,he has a certain star quality which can be compared to the likes of George Clooney of today.

There is something incredibly sweet about the way this story unfold’s,it almost feel’s like you are watching a stage show,with the fake backdrop and the singular camera shot,which only highlights what a brave and well written story this is.

3 thoughts on “The Rope – 1948 – Movie review – James Stewert is head and shoulders above the rest!”