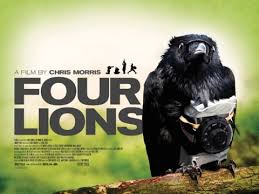 If you have watched this movie and thought “should I really be laughing at this type of subject?” Yes you should is the answer. I thought exactly the same first time around of watching. The first time I didn’t really have my laughter head on, I always said I would give it another go at some point and boy I’m glad that I did.

Just when you think you have met some ridiculously stupid people. Then you are introduced to three of the most uneducated Islam extremist around, the fourth being slightly brighter that knits the group together.

The four Lions set about making their impact, to show their loyalty to their extreme religion. Two of the guys head to Pakistan to train with extreme radicals. To their surprise they find there host unwillingness to act as characters out of a Rambo movie disheartening. It’s not to long before they are being attacked by insurgents that they take matters into their own hand, with devastating effects. it’s not long before they are heading home, but not without leaving a legacy to their stupidity.

Returning after their mission they reunite with their friends. Together the four formulate a plan that will catch the attention of their piers. The only trouble being “they didn’t have any to begin with”.