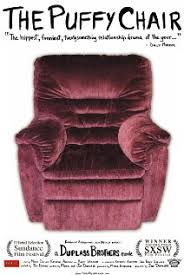 As promised I back tracked on another Duplass brothers movie. Don’t worry readers their back catalogue is not very big so I will not bore you much longer.

The Puffy Chair is their first full length movie, when I say full the run time is only 80 minutes. When you watch this you have to put in to perspective that this movie only cost $15,000 to make and to be totally honest it looks like it as well. This is not a bad thing though, it’s because the movie is shot with a handheld camera that makes it look this way. What you’re getting here is the first snippets of the Duplass brothers skills of taking a simple story and turning it into something rather enchanting. Again its the dialogue that keep you hooked, they really have a craft for entwining the characters.

I guess if you want to get yourself noticed, you write a script and if your think you can act, you put yourself in the movie. Mark Duplass does a fine job, he is a funny guy. You may know him now from the TV show The League, which is on its 3rd season, the movie also stars someone else from The League,  actresses Katie Aselton. 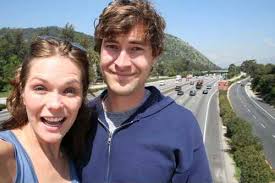 Josh(Mark Duplass) is planning a road trip, he wants to pick up a reclining chair for his father and make a special trip to deliver it for his birthday. Emily his girlfriend, who understands why he wants to go alone, but is not completely happy about and make her feeling known. Josh feels guilty, the next day he surprises her by asking her to go with him. 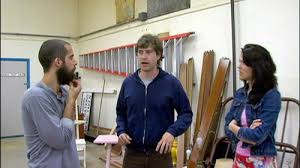 Along the way they visit Josh’s brother Rhett (Rhett Wilkins)who in return asks if he can tag along. So what turns into a solo trip turns into  the last thing Josh wanted.

The journey soon takes a few different turns then expected, it’s not long before questions are being asked about their relationships with one another.