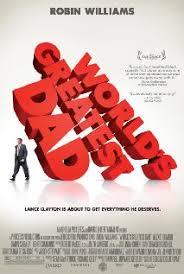 I guess you shouldnt judge a movie by its tittle, it could have easy of been some ordinary run of the mill slap stick generic garbage.  On second inspection the director was Bobcat Goldthwait, so if anything like the  characters he’s played in the past this wasnt going to be conventional. 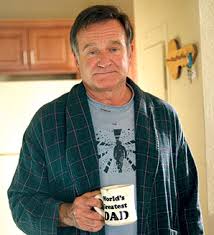 Lance (Robin Williams) a teacher dreams of being a published writer,but everything he submits is sent straight back as not good enough.  Lance who starts to get dragged down by his selfishness sons behaviour and the fact that one of his inferior colleges has been published at first request,  looks to be losing his girlfriend who he thinks is out of his league and his failing poetry class soon looks to being axed. Lance’s soon struggles to find the answers to make himself happy!

Again Lance catches his loathsome son up to his old tricks, he tells him to stop, but this time it’s too late.

Looking to save dignity of his son, he makes it look like a normal suicide. Soon things spiral out of control and Lance has a new-found fame that is hard to swallow, considering the circumstance.

This is Williams finest piece of work in a while. that’s not to hard though considering some of the stuff he has done of late. You can’t take away that he has put in a good shift along the way, it happens to the best of them. He should keep to these comic roles, it’s what he does very well, I understand they want to branch out and try new things, sometimes it just does not suit. The rest of the cast does a great job also , they leave you , loving them, loathing them, praising them. The characters will leave eye brows raised and noises scrunched in annoyance, but the end product will be smiles.

My original Score was going to be a 6, after writing this I realised it’s worth