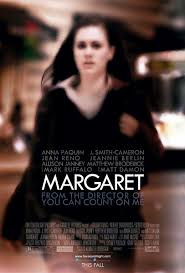 As I’ve said this movie was way to long. This was the cut version as well, the run time was 150 minutes and the uncut was 186 minutes. I’m so glad I caught the cut version, I don’t know what damage I would’ve done to myself with another 36 minutes. Someone had to jump in when they were editing this movie, and say “that’s enough now”. I can understand now why is cost $14,000,000, because the actors must have been clocking in and getting double for over time.

Lets not take this all too negative though, the movie does have some fine performances. I was surprised how well Anna Paquin played the part of Lisa. After playing Sookie Stackhouse for so long it’s easy to get type cast, but not here she carry’s the movie pretty much by herself.

Lisa witnesses  an accident while shopping for cowboy hat, no luck in finding one she spot a bus driver wearing one. As she tries to grab his attention, he takes his eyes of the road and runs a red light….knocking down a pedestrian and killing her. Lisa at first doesnt blame the driver, she assumed the victim was carless and the driver unfortunate. It’s not long before Lisa feels like the accident is her fault and the driver was careless and should be punished.

So that’s the premise in short, so why in the hell did it need 150 minutes to get there, this movie would have been absolutely fine if another 40 minutes was cut. It was too disheveled  for my liking.  New York is a lovely city, but we didn’t need to see every angle of it, I wouldn’t have been surprised and the end if their was a booking number to arrange holiday and flights.

Patience is needed for this movie, and hide you watch, as you may keep checking for when the end is near.