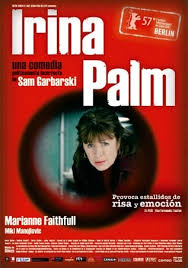 While chilling out late at night and channel hopping British free view TV, sometimes you will catch something that will grab your attention. For me it opens with Irina walking into a sex shop in Soho and applying for a job as a professional wanker? “Yes, that’s correct”. Men come and visit this shop and stick their cocks through a hole while on the other side someone like Maggie pleasures them. It’s all kind of wrong, but viewing is all kind of funny.

Maggie gets taken under the wing by Dorka, who shows her the ropes and the lubrication. At first Maggie can’t believe whats she has to do, but she’s there for a reason. Her grandson has picked up a rare illness and the waiting list on the NHS is endless, the only alternative is to go private. She needs to make six grand and fast! She soon gets comfortable with her surrounding and gets good at her job, soon clients are literally queuing around the corner.

The club owner who at first only employed Maggie for his own entertainment soon realises he has landed on a gold mine and does everything he can to keep her happy. She is given a new name and she is soon earning plenty of money, but it’s not enough, she need the money fast. She purposes a deal to the club owner, who in turn can’t refuse?

When she shows up one day with 6k and plants it on her sons table, he obviously questions where she got the money from, ashamed of her secret Maggie vows never to tell. Tom who suspicion soon get the best of him decides to follow his mother one day. Disgusted by what he unhinges Tom commands her to stop and refuses the money she has put to together to save his son’s life.

Every now and again these British flicks pop up and show us how great we are at making independent movies. We don’t have an action packed life style here on our small island, like any country we have story’s to tell. They may not be flamboyant, but they’re heart-felt. The movie makes you chuckle all the way through and the ending is not dramatic, but it does finish where you didn’t expect.