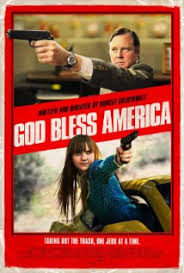 The idea of the movie sounds great. For anyone like me who cannot stand another year of these mindless karaoke shows, The X Factor, The Voice or American ideal! Then Bobcat Goldwait came up with an idea that fitted the bill perfectly. His two psychopaths he’s created blaze across the states taking out fellow Americans they see as noxious to the way we should and used to live. It’s true to say that since reality TV has been created mankind has dipped a few levels. The evolutionary ladder has taken a few steps backwards, we live in a world now were the new generation basically can’t even communicate properly. They speak a language created by the mindless dimwits that TV producers think the world wants to see! Of course they watch it! “There isn’t much choice; it’s rammed down our throats”.

This movie could have been fantastic. The problem for me was that Bobcat was playing it to safe; I can understand that he didn’t want to disturb a nation with what he really wanted to put on the screen. If he notched it up a cert then the movie could have been a little more daring. Yes it’s a comedy so it wasn’t meant to be a movie that shocked. Still it has moments that were you thinking “you can’t do that”.

To be perfectly honest I didn’t laugh a great deal. So an slaughter fest would have been a better option. Don’t worry people I’m not a maniac…..Honest!

2 thoughts on “God Bless America: Movie Review- A plot most of us can get on board with, but be more creative!”