One of best starts to a movie I have seen in a long time,you land right in the middle of the action,there is no introduction to characters,just straight to the meat of the movie; without any starters.

If there was competition for creating cool dialogue and super cool scenes Tarantino and the Coen brothers would be up there,well I can safely say that this director(Andrew Dominik – Chopper 2000) is following nicely behind. 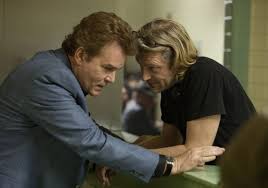 The special effects used in this movie are truly outstanding, people can rave on about the matrix which gave you a licence to fly around a room, in this film they have effects that blow your mind because of the attention to detail,from a bullet leaving a gun,to the bullet hitting the window and exploding into pieces while some poor guys brain is being torn apart by the impact,all this made even more impressive as it is shown in slow motion.

There are so many good performances in this movie,but I have to single out James Gandolfini, he plays a hitman who suffers with many emotional problems,one being his denial to admit he’s in love and secondly his jealousy, which is tearing him apart,you truly feel his pain and at one point he made me shudder as he performance went straight past good and stopped at pure genius.

Brad Pitt is his cool self,but the key to the originality in this movie is the fact there is no lead characters, each person gets roughly the same screen time and you are never quite sure what is going to happen which is a treat for a film nut like me who is very rarely surprised by the outcome of most modern-day films.

A real treat of a movie that reeks of class.