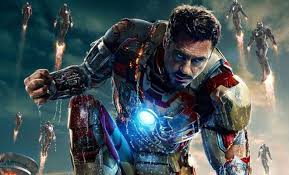 The movie starts off well enough and there is plenty of action and special effects to keep the eyes busy, but this soon filters out when Iron Man starts having a breakdown. I’m not spoiling anything when I say Tony gets a visit from the bad guys of which he invited in the first place. They’re set on destroying his empire; caught unaware Tony needs a last grasp plan for a getaway. No one gets away with trying to destroy Iron Man without retribution, while out of harm’s way Tony seeks his revenge.

When he is away it’s where the movie takes a dip, when Stark is taken away from his gadget room, what has he got to rely on? Not a great deal, it seems he can’t even think for himself without Jarvis (he’s computer) and pepper , so when the chips are down he seeks help from a 12 year old boy! Iron Man doesn’t turn into a paedophile, although that would have made things interesting! No this 12 year old not even nerdy, so what’s he going bring to the table except for his supped up potato gun? Of course he brings more than that; he’s got a cute face and razor whit! What more do you need when saving mankind from The Mandarin. 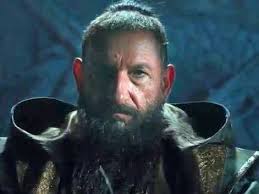 The dialogue in this movie is the best thing going for it, without it the movie could have been a lot worse off. RDJ is the king of coolness; he could pull off just about anything. It seems they really wanted to pull laughs out regularly in the movie, that’s normally a bad sign though, because it means they are trying to distract you from areas of the movie that are worth forgetting. The one character in the movie that does upstage RDJ is Sir Ben Kingsley as The Mandarin, he is pure comedy gold. He shows what a talent he is and will always be. Guy Pearce has more of a roll than one would like, I’m not saying he’s bad; he’s just not very memorable. Gwyneth really gets to show us this time around why she’s hot property of late, in the abominable area anyway. She even gets to don one of the many Iron man suits which shouldn’t really work because their only supposed to be programmed for Tony? 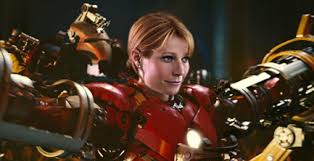 This instalment is part 3 for a good reason, Iron Man 1 was fresh and fun, 2 just went off the rails a little and with 3 they seemed to try and re-direct it back on course, but only managing to keep it on the curve.

I don’t see where they go from here if Robert Downey Jr does jump ship! I’m not sure anyone else could carry Iron man like he did. You just know it’s not the end, it makes too much money to quit.