There are many things you can do in four minutes, running a mile would be low on my list, so would watching this film again, if you break it down you have the essence of Rocky transferred into a movie about running, you have a kid (Kelly Blatz) who while looks convincing as a runner but failed to withdraw emotion from me with the rest of his performance.

Now if you are talking about a performance, look no further than Richard Jenkins, he plays the burnt out drunk with a love of running and knowledge of the sport, more than anything he brings a sense of realism to the film, he is so good in this film that he makes everyone else look permanently stationary, he embodies hurt, depression and happiness in just a few looks, he has honed his craft so well that he makes it look easy.

As for the film, I feel let down by it, it’s a very slow introduction, a somewhat interesting middle and a terrible ending, fans of Richard Jenkins should tune in for him, but as a film itself I would not recommend.

Heaven is for Real

I went into this with an open mind, and came out of it hating this preachy piece of shit, it’s based on a true story (much like the bible 🙂 )

A kid doesn’t die on an operating theater but apparently visits heaven while he is asleep, if it wasn’t for Greg Kinnear I would have turned off half way through, but I thought, Greg is a man with dignity, he would not take on a preachy God film unless there was some balance to the film that asked a lot of open questions about faith and life, A BIG X for those possibilities I am afraid . 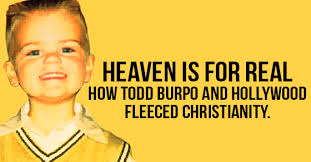 The film offers nothing but a shovel full of God & Heaven down your throat, the evidence they have, is based on the little boy telling them that Jesus has got a new hair cut and that he has met his sister who died when her mother miscarried years before he was born.

I am sure all the Cristian families will be playing this film from morning til night in the vain hope that their children will carry on the loose word of God, unfortunately for them, that is what this film was designed for, to say it was a coincidence that this happened to the preacher of the local church is beyond me, I think he should move into advertising and publicity full-time based purely on the fact that he managed to get this film made and continue the great lie that is religion.

I am going to make a film next year called; Santa, he is real!