Rust Creek is one of those films that make you second guess the quality just from its genre and lack of marketing.

I came across it on Netflix which is also another red flag to maybe this film being a bit low budget and a little bit weak , regardless of it’s intention.

But its with great delight that I have to say Rust Creek works on many levels.

Sawyer Scott is played by Hermione Corfield, a young Brit who is playing an American who’s only mission is to make it across the highways for an important job interview.

While on route that pesky radio bulletin advised young Sawyer to avoid the highways as traffic was looking hectic, as she heads for the back roads she slowly gets lost until she bumps into two lovely hill billies who seem pretty keen to have a good a time with the star of the show, Sawyer shows some real attitude and self respect when she fights off the wannabe rapists and limps off to the woods, here we go, Rambo 10, the female version!!!….. Well not quite, in fact the film takes an unusual turn as life goes back to normal in this hick town.

The film and the lead really offer a level of realism when it comes to real crime and real injuries, unlike most action films when you can be stabbed or shot and then run the London Marathon this film decides to play things out as they probably would be in life.

Hermione Corfield reminds me of Scarlett Johansson in the way she under plays the role, there is nothing cliche about the way she shows fear, pain or joy in this film, not that there is much of the latter. 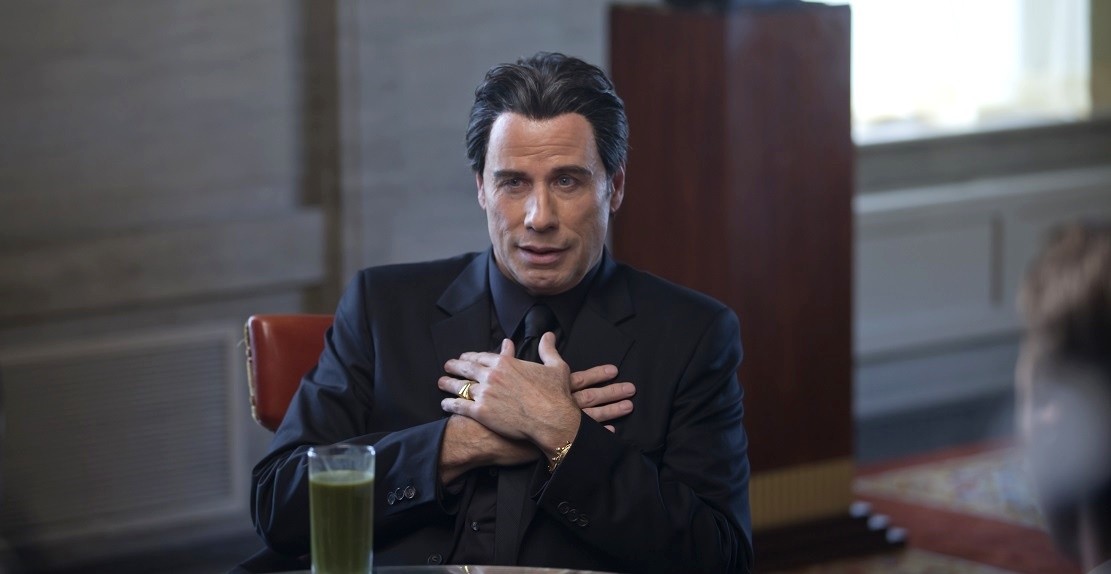 The film starts off well, a group of friends meet up over coffee and one of them mentions that he has a friend with information about stock that is only going up in the near future, they all agree to go in it together and raise the funds to invest.

The movie then copies the theme to Lock Stock & Two Smoking Barrels and creates a sense of panic and a need to raise a certain amount of money before their lives become threatened.

It was nice to see Michael Pitt again after ‘Boardwalk Empire’ & ‘Funny Games’ but the scene stopping moment comes when John Travolta shows up with his new wig, I say wig, I am guessing it is some kind of implant,black paint,superglue attachment, either way a close friend should have pulled him to one side and told him to grow old gracefully or go and get some fake hair that actually looks like hair, not the stinky raccoon he is using at the moment.

Back to the film and it just tried to hard to be slick and clever, a lot of the plot and dialogue has been used for similar films in the last twenty years and by the time the big reveal comes near the end,I just did not care.

I like Paul Rudd, he has that every man quality and lends his face beautifully to sarcasm.

So we have had Superman,Spiderman, Batman & now Antman? I am still not sure on this, the action sequences are entertaining and the skill of being able to shrink at will seems to bring as many solutions as it does problems.

I found myself losing interest after thrirty minutes, I am sure a thirteen year old would be glued to the screen, it just didn’t hold my attention even though Paul & Michael Douglous share good chemistry on screen and Paul offers some witty one liners the film quickly fizzles into a forgettable memory.

It’s been a few weeks since I saw this film but I can recall the dialogue & style of the film like it was yesterday.

The film is about a struggling writer who makes an excuse to talk to a beautiful women,what follows is a slow dance in the dark to discover if these two strangers have more in common than just sexual attraction.

I am in love with this film,it’s so unusual now day’s that a romantic film can make you feel anything for the plot or the lead characters,this movie does both with ease.

The title will probably give the plot away for people who have spent much time in France but for me I have never heard about the idea of having an open 5 to 7 relationship outside of marriage,the idea sounds morally wrong but as the film goes on I found myself swaying on both sides of the debate,added to this the romance blossoming around the story is enough to make you reflect on your own love life & smile within at the very prospect of asking your partner if he/she would entertain both of you having a fling between the hours of 5 to 7.

The concept is interesting but in no way does this become the shining reason to see the film,the writing & the acting are the reason,each character has depth and sincerity that will make you laugh,cry & breathe a sense satisfaction.

I am sure if this film was to become a reality for my life, my wife would have a fantastic new lover & I would end up in a coffee shop reading the sports section between the hours of 5 to 7.

It’s very rare when you come across a movie that get’s you excited about such a basic premise,a young man is attracted to an older french lady,most experienced viewers would dismiss such an idea as done,only problem with 5 to 7 is the movie is a delight and a shock to anything that has gone before it!

The lead actress is so beautiful that I have gone away since just to check that there was no  CGI involved,she is so charming that she makes an older man feel 15 again just at the drop of her grin.

The lead actor makes easy work of playing the devoted lover who is lost from the start in desire,jealousy & envy.

The pure genius within this film is the believability and heart that pumps throughout.

I found out about Nick Cave after bashing someone’s ear about Morrissey being such a great lyricist,I was told in bolshy terms that he doesnt have anything on Nick Cave,at that time I kind of knew Cave from the five minutes he spent with Kylie Minogue.

Ten years on & he is the best front man,best creator of music I know of.Morrissey still adds to the pool of genuine music to take notice of but Cave really breaks ground and leaves the rest without regard!

Do yourself a favour & downoad each album of Cave & slowly digest his back catalogue.